The secure digital card (SD) is a low cost, non-volatile memory card format developed by the SD Card Association. Since its inception back at the start of the century, the demand for this medium-sized, energy and space-efficient, the memory storage device has been growing at a fast rate. Therefore, to meet the market requirements, the SDA was set up as a non-profit organization to promote and create SD Card standards. There are various topics related to the SD card such as the different device families, speed classes, smart cards, card security and so on and it is used in various markets like digital cameras, personal computers, and embedded systems. Some of the standard variations include SD, SDHC, SDXC, SD-ultra high speed etc. The microSD is the miniaturized SD memory card format with a small form factor and is widely used in various electronic devices.
What we are going to learn is the use of SD cards in an embedded system. To be specific, we will be dealing with the use of SD cards in small embedded systems.

SD card has a native host interface apart from the SPI mode for communicating with master devices. The native interface uses four lines for data transfer where the microcontroller has SD card controller module and it needs separate license to use it. Since the SPI is a widely used protocol and it is available in most low-cost microcontrollers, the SPI mode is the widely used interface in low cost embedded systems. The working voltage range of SD family is 2.7V to 3.6V and this is indicated in the operation condition register (OCR). 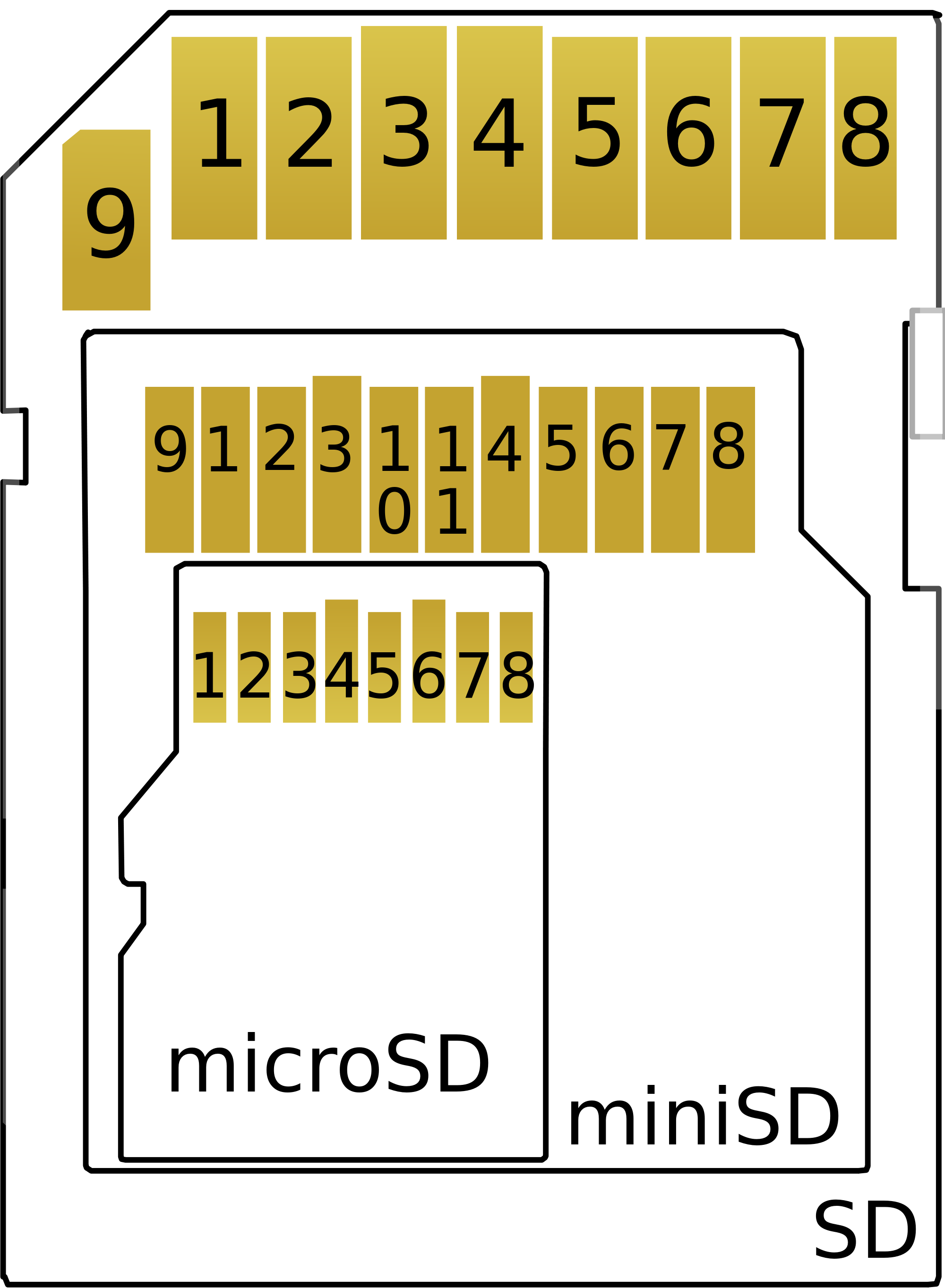 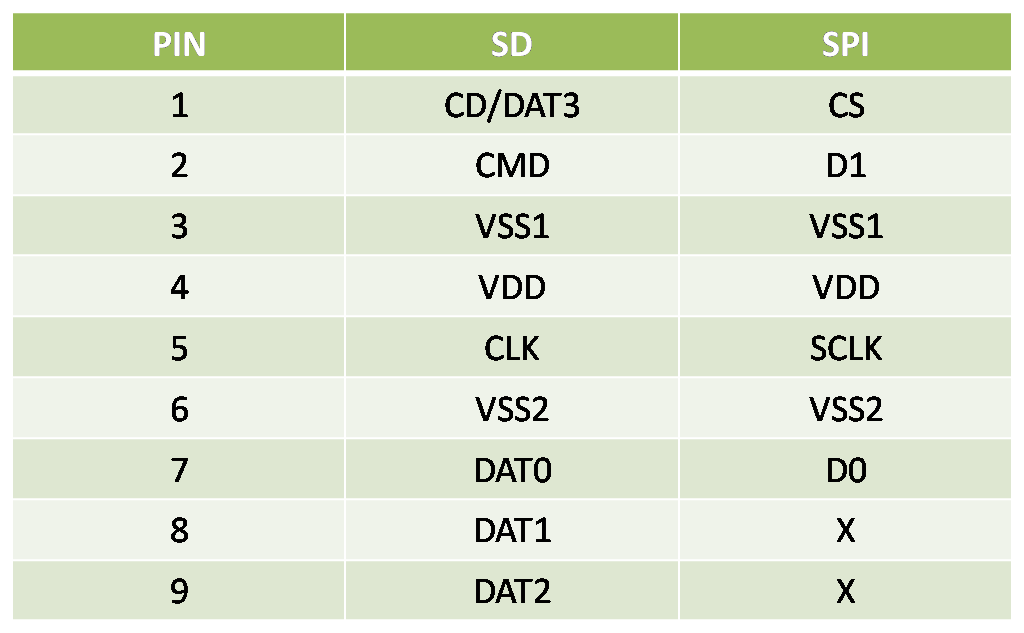 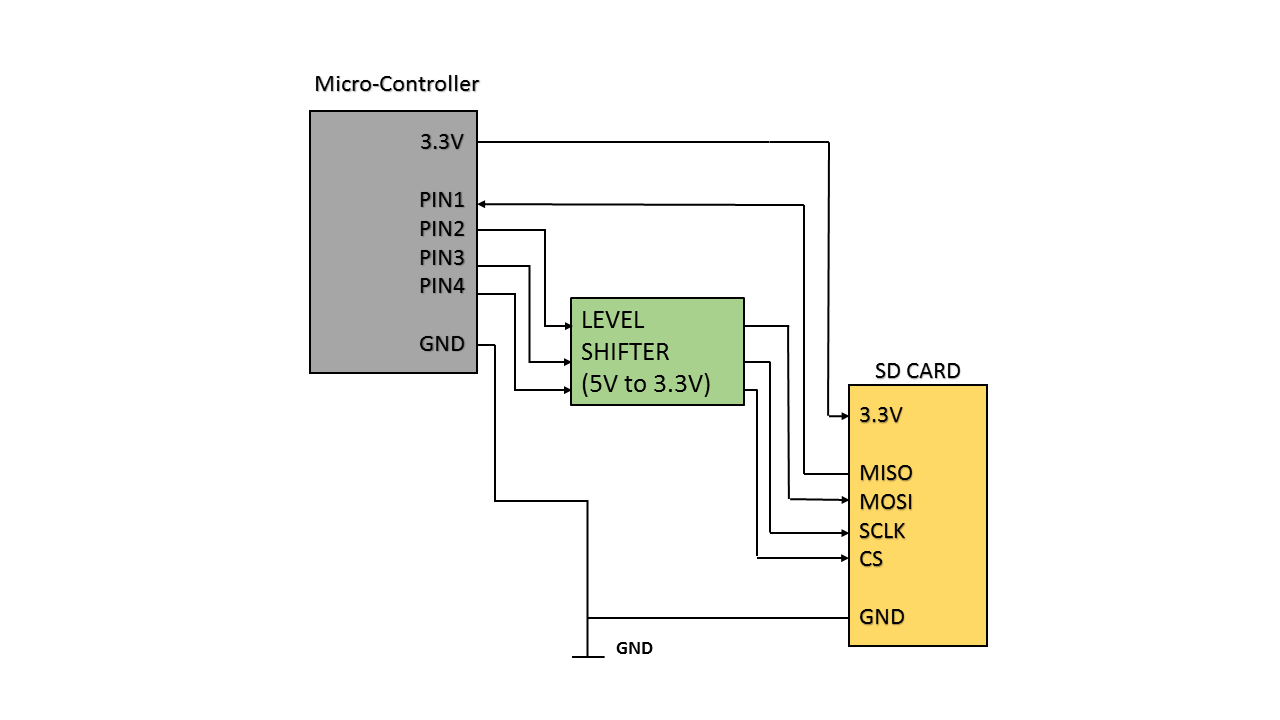 IMPORTANT NOTE: While connecting the power supply, make sure that the supply is drawn from a 3.3V supply as a 5V supply would see your card go up in smoke.

Once the connections are set up, we are ready to interface our hardware with the software.
Set the directions of each of the four pins correctly. While activating the SPI mode, an ideal configuration should be, mode(0,0) and the phase with input sampled at the middle of data out. Also, the clock frequency should be set in the range of 100 kHz and 400 kHz prior to initializing the card. Once the initialization is done, the clock can be set to a more desired frequency.

Next comes the tricky part, initializing the SD card and performing the raw data communication. A systematic approach to programming the software would make the task pretty easy.
But first, it is important to learn how the micro-controller activates the SD card. There are a fixed set of commands and responses, which must be followed to create a command to response structure in our program. The data is transmitted in a byte-oriented format with a definite length.
The following table shows the necessary commands to the card and the corresponding response from the card.

Every command has a constant length of 6 bytes.
The first byte is the addition of the command number and the number 64.
Example:
For CMD0: command number 0 + 64 = 64 = 0x40 in hexadecimal.
For CMD1: command number 1 + 64 = 65 = 0x41 in hexadecimal.
And so on.
This is followed by a set of four bytes which are known as the arguments. These arguments usually contain the address of a data or the length of a block.
The last byte is the CRC (Cyclic Redundancy Check) Byte. Most commands in the SPI mode does not require a check byte if the CRC feature isn’t enabled. For some commands like CMD0, the CRC is 0x95 and in most cases, a 0xFF is sent. Enabling the CRC requires you to send the correct check byte from the micro-controller. So, ensure whether the CRC feature is enabled or disabled.
A command frame looks like this-

The card will receive a command when the DO pin (Data Out) is driven high as shown above. The CS pin (Chip Select) must be driven high to low before sending the command and must be kept low during the process. The time between a command and its response is known as the command response time (NCR). As mentioned earlier, regarding the clock pulses from the micro-controller, the corresponding response byte sent back from the card to the microcontroller should be driven by the serial clock pulses of the micro-controller. There is a chance that the response byte from the card might get skipped by the microcontroller due to the absence of a driving clock pulse. Hence it is necessary to make sure that an 8-Bit clock pulse is sent to the Card soon after the Command Frame is sent (Refer the TECHNICAL NOTE below). Also while receiving a Byte from the card, the DI pin (Data In) must be driven high.

Furthermore, let us analyze the different types of responses that we get from the card and what they mean. 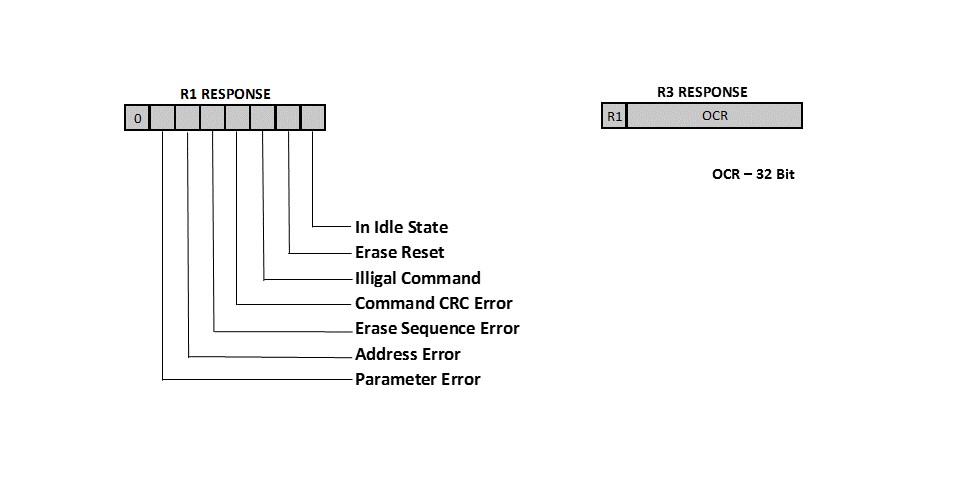 Now, as far as sending the commands are concerned, there is an order in which they must be sent. Only the commands, CMD0, CMD1, ACMD41, CMD58 and CMD59 will be accepted when the card is in its idle state. Sending any other command will likely to yield an illegal response.

TECHNICAL NOTE: After interfacing the card, the micro-controller must always send a set of bytes, which we will refer to as dummy bytes. One dummy byte is 0xFF. These dummy bytes have a simple yet significant purpose. Prior to the initialization, the card must know the frequency at which the data is being sent. By sending around 75 dummy bits approximately (dummy byte * 10 times = 80 bits), the card will be ready for communication. Also even after every command is sent, it is a good practice to send at least one dummy byte. A logical explanation for this is that communication is driven by the clock pulse of the micro-controller. The clock pulse is sent only when the data buffer is filled. After every response is sent and prior to the next command or between command and response, the SCK will stop generating pulses due to an empty data buffer. To ensure the continual transmission of clock pulses between every command, fill the data buffer with a junk value such as a dummy byte. To create a dummy byte function with the number of loops as the argument.

The first command to be sent to the card is the CMD0 command. The structure of every other command-response should be based on this model.

Send the CMD8 command next to check the version of your SD card.
The difference in the 6-byte commands are
First byte: 0x48
Next four bytes: 0x000001AA
CRC byte: 0x87

We are looking for two possibilities in our response byte. Either 0x01 or 0x05.

A 0x01 response means that you have a version 2 SD card. The 0x01 response is followed by the 4 bytes 0x00, 0x00, 0x01, 0xAA in the order of their transmission from the SD card which is, in fact, the argument you send in your command.

Once the above two commands (CMD0 and CMD8) are done, it is safe to say that our SD Card is working in good condition and ready for data Read/Write.
Additionally, just to ensure whether the SD Card is functioning in the correct working voltage, send the CMD58 Command.

Suppose the response of CMD8 resulted in 0x05, a few considerations have to be made regarding the initialization procedure. Version 1 cards may not support the ACMD41 command. And even if they do support the ACMD41 command, send the CMD55 command and check for the response, which will be 0x05 instead of 0x01 and then instead of sending the CMD41 command, send a CMD1 command to complete the initialization process.

Now, we are ready for the raw data read/write.

The first thing to do here is to set the block size of the read/write block.
For this, send CMD16 command. The arguments for this command should specify the block length.
Example: To set the block length to 512 bytes, send the 4-byte argument as 0x00000200.
Send a 0xFF as the CRC byte and wait for a 0x00 response byte.

The 4-byte argument of every command will contain the specified address of the sector from where the data is being read or written to.

Send the CMD17 command for a single read block and wait for the expected response 0x00. Once that is done, wait for the SD card to send another response, 0xFE. This response, transmitted by the SD card, is an indication for the start of continuous transmission of a block of data. At the end of this, send a dummy byte or two and the process is complete.

In the case of CMD18 for a multi-read block, follow the procedure up until the 0xFE response. After this, the card will be transmitting blocks of data till it receives a CMD12 command, which is the indication from the microcontroller that the block read is over.

Creating a function for each of the read/write sections is the ideal way to code the software. This is the basic structure to be followed during read/write operations performed on raw data on an SD card.