IO board is the acronym for input/output board. As the name hints, the IO board can be configured into input or output modes by turning the corresponding switches on and off. During the input mode, the push buttons can be used as inputs.
There are 8 switches which can be connected to a port using the given connector. In output mode, the state is displayed by 8 LEDs which corresponds to a port. There are two IO boards in PIC kits which will give 16 IO pins as a whole. 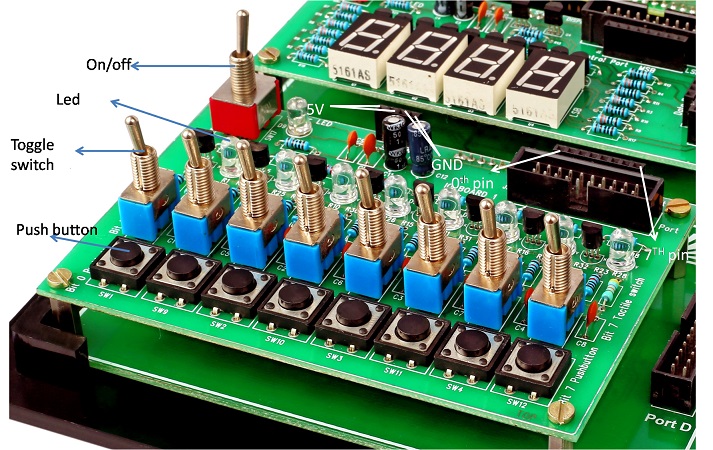 They help to select input and output functions. Each bit has a corresponding switch.

When the tactile switch is in the input mode, a user can use a corresponding push button for giving inputs.

The LEDs indicate output status when the tactile switch is in the output mode.

The above image shows the basic structure of I/O board. I/O board can be activated by turning on the switch on the
top left side.Push buttons act as data input device and LEDs act as output displaying device. Toggle switches are used to toggle between the input mode and output mode. Test pins are used for debugging purposes. The I/O board provides onboard 5V supply.

Each bit of data can be entered by pressing the corresponding button and turning off the LED indicates the button press in the input mode.

Put the switch lever (SPDT) in down position. Now use the push button below the switch to set and reset the pin.
The default state is high and pressing the button will give a ground signal (low) on the pin.

Put the switch lever (SPDT) in up position. Now the output will get displayed on the LED.