A DC motor is an electro-mechanical device that converts direct current into mechanical energy by means of rotation of a shaft. It works on the principle of Lorentz force by which the current carrying conductor in a magnetic field experiences a force hence the conductor moves on the direction of force called Lorentz force. In this chapter, speed control of a DC motor using pulse width modulation (PWM) technique is described.

The commutator is made segmented to make the torque unidirectional. Each time the current reverses the magnetic field, the direction of force developed is reversed. An opposition force is required for energy conversion and this opposition force is being given by back emf, the voltage being developed in the armature conductors when they cut the magnetic field. This is the basis of working of a dc motor.

Controlling the speed of dc motor can be done by different ways like using a potentiometer and also by a controlled current
to the armature. Apart from these techniques, pulse width modulation is the effective way to implement motor speed control. Pulse width modulation is a digital technique for coding a digital data into a pulsating signal which looks like a square wave. The applications including motor speed control, encoding messages in telecommunication systems, sound synthesis in audio amplifiers

PWM find applications including motor speed control, for encoding messages in telecommunication systems and for controlled switching in switch mode power supplies and for sound synthesis in audio amplifiers etc.

PWM uses a rectangular pulse train whose modulation results in the average value of the pulse sequence. 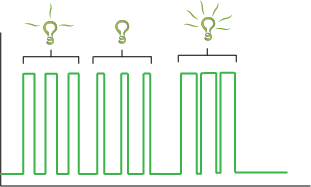 Devices in PIC family including PIC 18F2455/2550/4455/4550 have two CCP (Capture/Compare/PWM) modules and each of them contains a 16-bit register which can operate as a 16-bit capture register, a 16-bit compare register or a PWM master/slave duty cycle register which is primarily controlled by timer modules.

CCP, which stands for capture, compare and PWM, is a hardware module inside the PIC microcontroller. It helps to trigger events based on time. Capture mode allows us a duration based timing of an event. This circuit gives information regarding the current state of a register which constantly changes its value. In this case, it is the timer TMR1 register.

Compare mode compares values contained in two registers at some point. One of them is the timer TMR1 register. This circuit also allows the user to trigger an external event when a predetermined amount of time has expired. PWM module generates the rectangular pulses whose duty cycle and frequency can be varied by altering the PWM registers.

We can’t drive a dc motor directly through a microcontroller pin. It usually operates in 3.3v-5v and lower currents but DC motor normally works in 6-12v, 300mA and it has other drawbacks like the back EMF produced by the DC motor may harm the controller ports and damage them. The solution to the above problems is using motor driving circuit usually known as H-Bridges. They are basically built using FETs and many dedicated ICs are also available like L293D etc.

These are dual H-bridge motor drivers, i.e., by using one IC we can control two DC motors in both clockwise and counterclockwise directions. The L293D can provide bidirectional drive currents of up to 600mA at voltages from 4.5 V to 36 V.

The below circuit shows interfacing L293D with PIC microcontroller to control a DC motor. 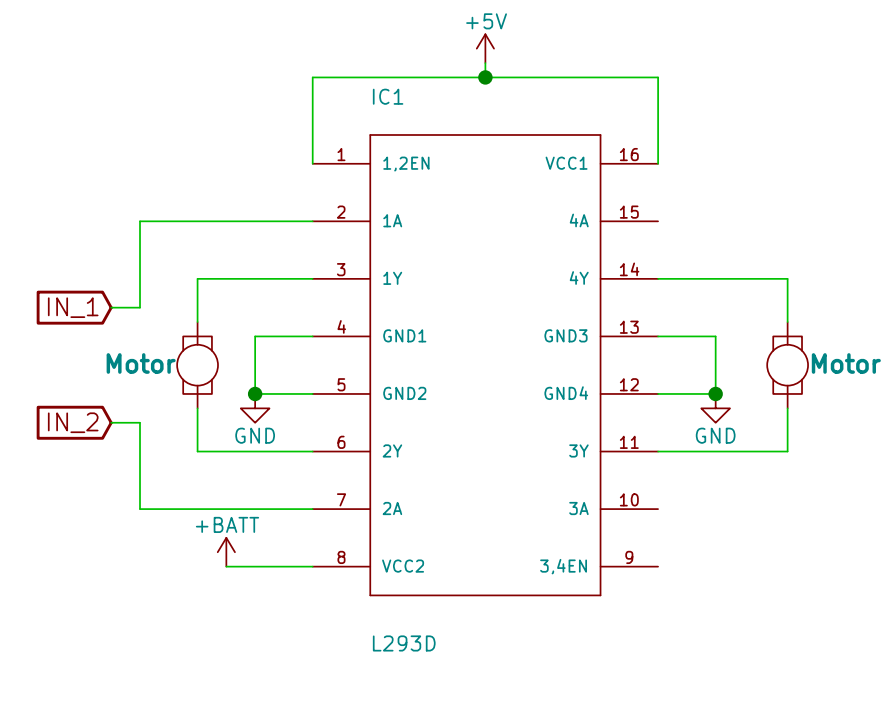 We are using the microchip’s XC8 PWM peripheral library to make the source code much simpler.

In the above circuit, we apply PWM signal to the 1-2 EN pin of the L293D which actually controls the first motor.

Here is the equation for calculating the frequency of the PWM signal:

For example, we use 20MHz clock and the o/p frequency is 2KHz;